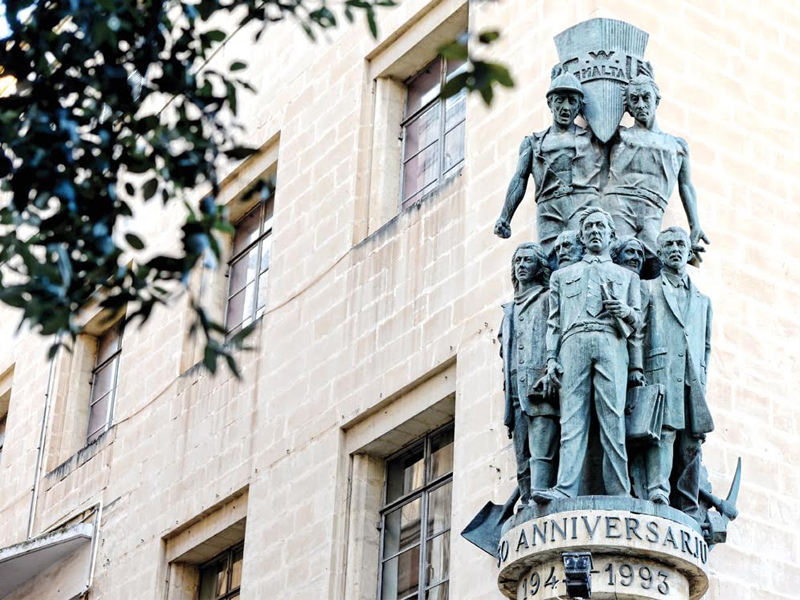 The GWU was founded during the devastation of the Second World War at a time when Malta was a British colony in the centre of the Mediterranean Sea. Because of its geo-strategic position Malta served as a useful military base for the British Navy and Air Force thus earning itself the title of ‘island-fortress’.

The Second World War, brought with it a relatively high level of employment mainly in the ship repair sector and other ancillary sectors directly linked to the needs of the western military powers in the Mediterranean region.

The GWU found its roots towards the end of 1942 amongst the workers of the then British Admiralty Dockyard. Reggie Miller, a civilian clerk in the Drydocks, successfully convinced a small group of workers to set up a strong general union that would in the future leave its mark on the country’s recent history.

Reggie Miller’s impact was immediate. Miller began working to establish what was to be the General workers Union. Consequently, making him the GWU’s founding father. The first public meeting was held in March 1943 where an enormous mass of workers attended.  From among them, an interim committee was appointed with the responsibility of drafting the Union’s constitution (the Statute). Subsequently the draft constitution was read and explained to the workers in another mass activity held a few days later.

At the meeting Reggie Miller enthusiastically accepted the workers call to serve as the Union’s first General Secretary. Upon establishing itself the newly GWU appointed leaders who embarked on an intensive campaign for membership. Therefore, many more public meetings and conferences were organized around the Island. Needless to say, such, activities were held at various places of work due to the fact that they feared hostility and antagonism by the employers. The first GWU members were initially enrolled on the 1st of July 1943.

While still in its infancy stage, on the 6th of July 1943, the GWU combined its efforts with other organizations which were mostly small groups created for benevolent purposes. The GWU together with the other organisations submitted a memorandum to the British Government summarising a number, of long-standing demands, including a claim for an adequate rise in the workers’ wages and salaries.

Due to the intransigence of the shipyards authorities who did not want to give in to the workers’ demands, on the 24 of August 1943, the first unofficial strike took place. In late September a wage increase was announced, however, short of the original demands so the offer was immediately rejected by the workers’ and their representatives. which was consequently followed by another strike action on the 28th of September of the same year.

The days following were characterised by the laying down of tools also by many other workers from the several British defence establishments, in solidarity with their fellow workers. The few existing unions abandoned their solidarity with the striking workers fearing the repercussions and retaliation of the British government on the Island, as a result this left the GWU fighting this dispute alone.

At the time, Britain was fiercely engaged at war, it was obvious for the British to diplomatically and subtly control what comes out of the press, particularly anything published in the English language. During industrial relations instability of the time, Miller and his colleagues were labelled as saboteurs and accused of agitating the workers to use violence. However, such accusations proved futile and on Tuesday the 5th of October 1943, the GWU was formally and officially founded.

Ever since its foundation, which took place before the end of  the second world war, the GWU and its leaders has never stopped working to constantly improve and guarantee the working condition of the residents of Malta. Since the GWU was founded it has not only encouraged trade unionism, it has successfully carried out its work and mission to improve the quality of life and guarantee a fair future for workers. The alliance between workers and the GWU has led to the achievement of economic and social progress in all areas of work.