Need for innovative solutions to reverse the deterioration of workers’ rights 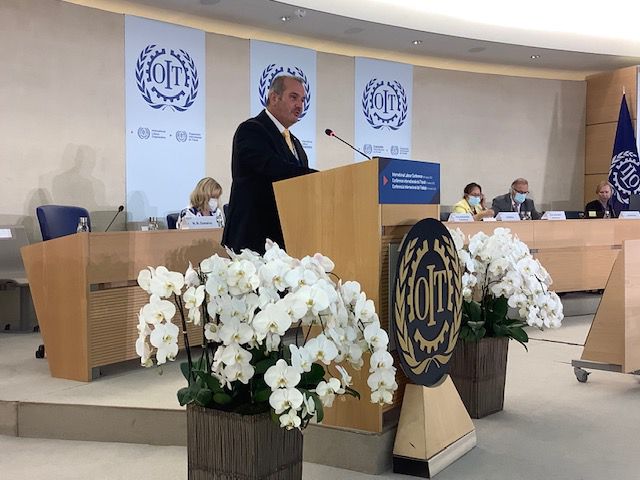 In a speech by the Secretary General of the General Workers’ Union, Josef Bugeja, during the 110th International Labor Conference in Geneva, Switzerland, he stressed the need for innovative solutions to bring the world back. the deterioration of workers’ rights, improving employment opportunities and working conditions, the organisation of labor and production, and the governance of labor. He praised the rapid development of the social and solidarity economy in Malta.

“In the post-pandemic recovery period, we need to be talking about recovery, decent work and social justice. Instead, we are talking every day about Russia’s horrific attacks on Ukraine. Attacks are being carried out with a total lack of attention to all concepts of democracy, sovereignty, international law and human rights treaties” said Mr Bugeja.

During this Conference, held from 27 May to 11 June 2022, representatives of Governments, Workers and Employers from 187 ILO Member States, including Malta, met to discuss issues of the world of work at the International Labor Conference (ILC). Annual conference in Geneva.

In this discussion of the Reports of the Director General and the Chairperson of the Governing Body, on behalf of all Maltese workers, Mr Bugeja condemned these unprovoked, unjustified and illegal attacks and stressed that he joins in solidarity with the government, the workers and the employers in Ukraine.

He added that in addition to the deaths of innocent people, these tragic events are shocking the global economy, increasing hunger and instability and further complicating the recovery from the pandemic.

“The aftermath of the pandemic and now the invasion of Ukraine have exacerbated pre-existing decent labor deficits, increased poverty, worsened working conditions, widened inequalities and exposed digital gaps around the world while putting additional pressure on social protection systems.”

This International Labor Conference (ILC), which sets out the ILO’s international labor standards and broad policies, often referred to as the international labor parliament, is also a forum for discussing social and labor issues key work. Each Member State is represented by government delegates, employers and workers.

The key role of the ILO in promoting the Social Economy and Solidarity stems from its constitutional mandate. In addition to the Centennial Declaration, in 2021 the ILO called for a human-focused agenda and recognized the role of Social and Solidarity Enterprises for recovery with a decent job opportunity for all.

“The social and solidarity economy can be part of the solution as it endorses inclusiveness, human dignity, environmental sustainability and decent work in its economic activities on the legitimate acquisition of profit.

“It’s the people’s economy and it can help transform our societies to be fairer and more inclusive. I have no doubt that the social and solidarity economy can also become an essential part of the tools for achieving the 2030 Agenda for the United Nations Sustainable Development Goals.” added the Secretary General of the GWU.

“As it is estimated that around 40 cooperatives in 15 different sectors, including pharmaceuticals, transport, agriculture and fisheries generate no less than € 120 million a year, in recent years, public authorities and various non-governmental organisations have signed agreements for the provision of specialised services in our society.”

The Secretary General of the GWU mentioned how the Maltese Government this year published the “Social Enterprise Enterprise Act 2020” which facilitates the further development of sustainable social enterprises to address some of the needs of our society while contributing to economic growth.

Malta has also signed the “Toledo Declaration on Social Enterprise”, recognising and committing itself to supporting ecosystems conducive to the social and solidarity economy and ensuring that the necessary financial support is in place to make it viable and sustainable.