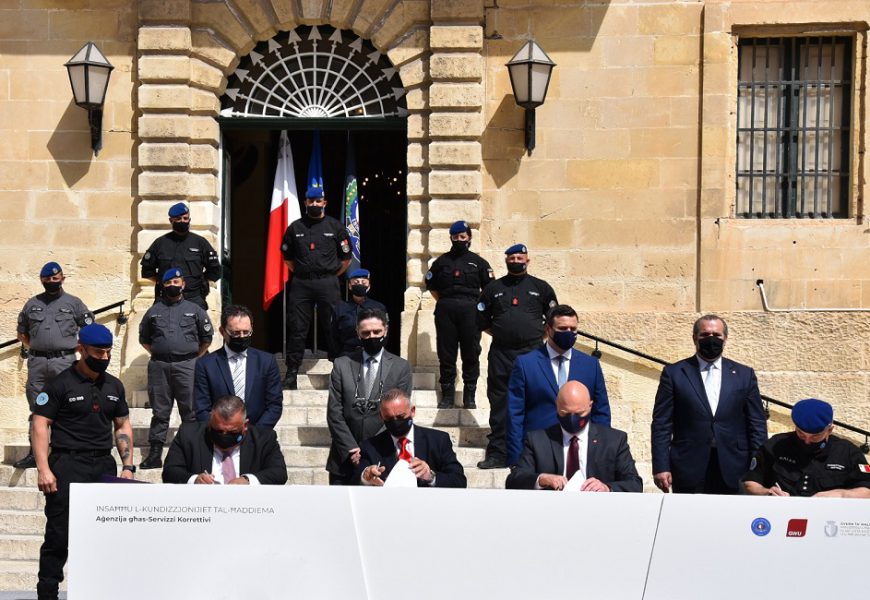 The General Workers’ Union has signed a new collective agreement for Correctional Services Agency workers covering the period 2020-2024. In addition to improving working conditions, including new wages and allowances, this agreement also includes a number of new benefits related to the advancement in the career of workers through a new structure and new ranks ( degrees).

The agreement was signed on behalf of the GWU by the Secretary of the GWU Disciplined Bodies, the Section of Security and Correctional Employees Theo Vella and the representative of the union Correctional Inspector Helenio Galea. The Correctional Services Agency was signed by Chief Executive Officer Lt Col Alexander Dalli (ret’d) and Head Administration & Operations Randolph Spiteri. Also present at the signing were GWU General Secretary Josef Bugeja and GWU Deputy General Secretary Kevin Camilleri.

In his message, GWU Secretary of the Disciplined Bodies, Security and Law Enforcement Officers Section Theo Vella said this collective agreement is being signed after long months of negotiations. “The negotiations took a long time because the conditions of these workers were imposed in 1994 and were even worse than those of workers in the public sector.

Not only did these workers work an average of 46 hours a week and were paid at 40 hours, which meant that they had the hourly rate, the overtime rate and the Sunday / Public Holiday rate at a lower value, but they also had no class allowance and no shift allowance like some workers in other sectors. When you have working conditions that go back many years, it is natural that negotiations take longer and it is more difficult to reach an agreement. However, there was goodwill on the part of all parties, namely the GWU, the government and the agency’s administration, and we eventually came to this agreement. “

Vella told us that although the signatories to the collective bargaining agreement were 4 people (2 on behalf of the agency and 2 on behalf of the GWU), we were able to achieve these accomplishments with good will and collective efforts by several people. . Special thanks to the committee representing the Correctional Officers, to the CEO of the agency Colonel Alexander Dalli and last but not least to the Prime Minister Robert Abela and Minister Byron Camilleri, who have always stood by the side of these workers.