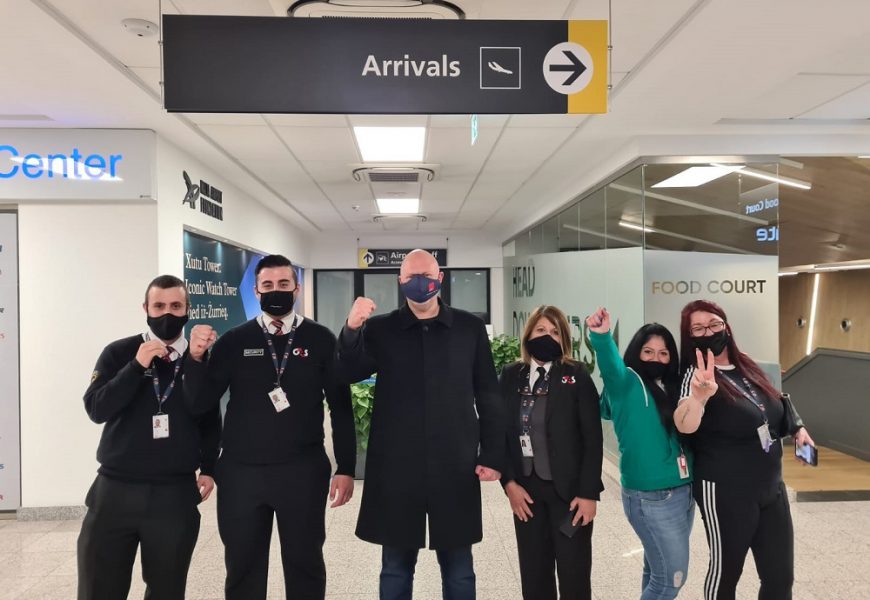 After 91.7% of G4S workers at MIA elected the General Workers’ Union GWU to represent them.

“I think the result we have now achieved is a testament to how sensitive workers are to national situations and how much they have really recognized the proactive work of the GWU during the pandemic.”

This is what the secretary of GWU Disciplined Bodies, security and Law Enforcement Officers Theo Vella told this newspaper. Following a ballot that was open for 12 hours, 91.67% of G4S workers working for MIA chose the General Workers’ Union (GWU) to represent them.

Vella said, “In the G4S, we already have recognition, but there was one particular place which were the Aviation Security workers and some other MIA stationed ranks represented by other unions. They had complained and expressed their dissatisfaction with the union that had been representing them for several months and submitted many new members and resignations from that union. We filed the document that we have the majority under the law. We asked the company to recognize us as a union while the other unions continued to claim that they still had the majority. Since then, a month passed, and the voting process had to be done. “

He added: “Thanks to the cooperation we got from MIA the vote was open for 12 hours. GWU got more than 91%, while the other unions got 5% and 3.33% of the votes were invalid. We were confident that the result would be good, but it was more than we expected, and that shows that the message is clear. The turnout was not that low, of the eligible workers 82% went to the polls. We didn’t put any pressure on workers, the only action we took was to encourage people to go and vote so they could express themselves in that way. “

Against the backdrop of the airports as a whole had been hit hard by the Covid 19 pandemic, Vella acknowledged that it was precisely the government’s timely Wage Supplement assistance that saved their jobs. He said that without the government’s help, about three-quarters of the workers would have lost their jobs.

At the same time, he said, “I think a lot of the workers appreciated the way we worked as the GWU during the pandemic. There was anger at the way the other unions worked during the pandemic, while they recognised how proactive the GWU is. We took tough positions and sometimes criticized, but we never did so with bad intentions. As the GWU, we recognized that the worker’s pain needed to be heard, and one of the things we were for was flexibility, and people appreciated our approach. I think the result we have now achieved is a testament to how sensitive workers are in national situations. “

He added: “We have not made any particular promises because we are responsible. We are confident that we will ensure that these workers’ grievances are regularly referred to management and that we will stay in touch together to find the best solutions. “

Vella said that this is a lesson for any union that in a situation where the country is in trouble, the responsibility of the union increases.

He also recalled that the work of the GWU did not stop during the pandemic, so much so that they even worked on the collective agreement of the army, worth 8.2 million euros.