Work And Development, The Italian Ambassador Meets The GWU-CGIL Referent In Malta 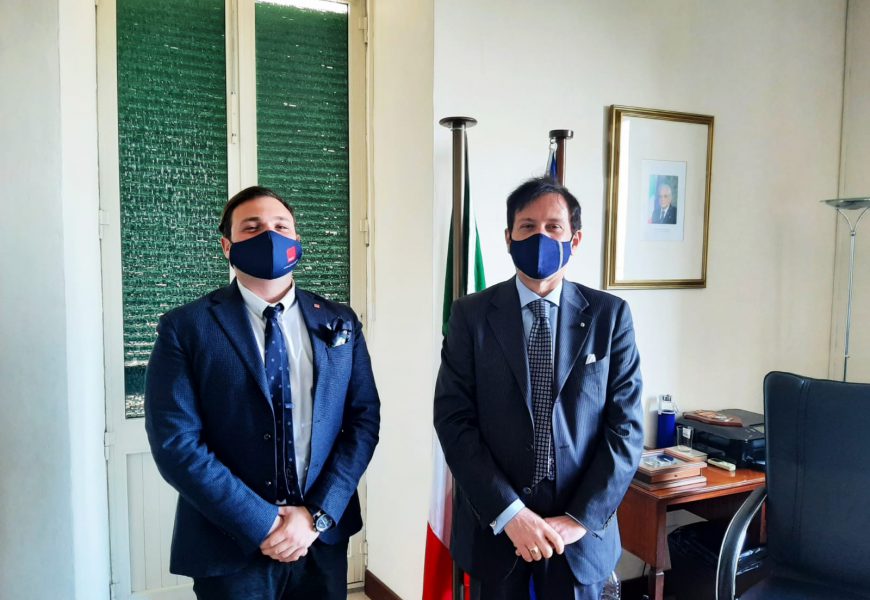 The meeting with the top executives of the union is part of the relations that the diplomat has initiated with the Italian entities present on the Island.

If an Italian citizen moves to Malta to work, he will always find a supportive network that will never leave him alone. The workers’ protection and the spread of legality remain the pillars on which economic and, above all, social progress rests. These are just two of the salient points that emerged in the meeting held this morning between Italy’s Ambassador to Malta, Fabrizio Romano, and Riccardo Travaglini, the head of the GWU and CGIL, “Contact Point”, which operates on the archipelago for over a year.

During the meeting, the issues caused by the pandemic were discussed at length, and the necessary organising action carried out by GWU and CGIL.

Travaglini has also better contextualised the genesis of the multifunctional counter established by GWU. The result of a joint action that certainly saw the participation of the CGIL but above all the will of the president of Capitale Lavoro Spa (an in-house company of the Metropolitan City of Rome Capital), Antonella Gobbo. Together with the support and expertise of the lawyer Dario Manna. He is the coordinator of two projects for the European mobility scheme funded by the EU program for employment and social innovation, “Your first Eures job” and “Reactivate”. They believed that an Italian institutional presence to support mobility was crucial. The two projects have undoubtedly represented many Italians in Malta a great opportunity and concrete support for mobility and integration.

In the meeting with the Roman Ambassador, Travaglini underlined the social role played by GWU, particularly attentive to the presence and support above all of the foreign workers who have arrived in Malta in recent years: at the end of 2019, there were 67,596 of which well over 15,000 were Italian citizens.

The Italian population in Malta is very young and therefore still has an extended stay prospect; recently, the migration phenomenon was examined by the Maltese statistical bodies to have a reference profile of those who have chosen the archipelago a work destination.

It is, therefore, evident that in the light of this evolution, training and information represent an essential combination of the organising action that has been underway for some time. The number of Italians is growing daily, as is the number of union representatives in companies and the GWU itself.

The renewal of GWU delegates in the IRTUC or CSIR (the Inter-Regional Trade Union Council) brought together the regional trade union organisations. Organisations affiliated with the European Trade Union Confederation in the cross-border areas have led the GWU to indicate two names: the International Department Jason Deguara and Dr Stanislao Filice.

Therefore, an ever more vital collaboration is forging between Malta and Italy and assisting workers, and their families is a joint mission with Malta’s Italian institutions. The CGIL itself promoted through its delegate to the General Council of Italians Abroad, the highest representative body of Italian expatriates, of the motion for the establishment of COMITES, a representative body of the Italian community directly elected by compatriots residing in Italy. Abroad, and this year there will also be a vote in Malta for the first time.