The views of some female GWU employees on Women’s Day 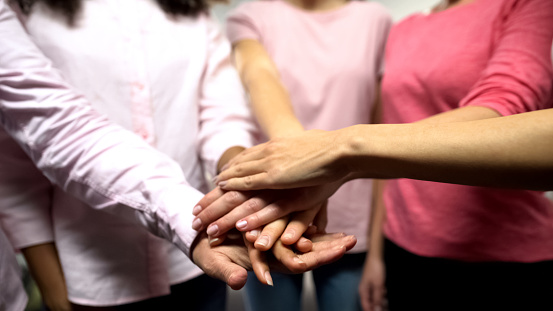 On the occasion of Women’s Day, we have gathered on this page the views of some female GWU employees on this day dedicated to all women and their role yesterday, today and tomorrow.

Women, yesterday, today, and tomorrow, their role is still important and will continue to be important, both in the family and in society. But you can never go home and only take care of the family. It is true that the woman takes care of the children more than the man, although this concept is changing somewhat. Women’s Day is well celebrated and remembered.

However, I would like to see a greater presence of women in politics, at high levels in the workplace and in the committees where decisions are made all the time. A woman can think and can make decisions, sometimes more than a man. I believe that in Malta we are a bit behind in this respect. I personally believe that the role of the man is still too dominant.

I am not saying that the woman wants to be more than the man, but at least they want to be equal. It’s not just that women today have to work hard to make ends meet and have no other choice. It’s important that the woman is not dependent on the man, especially when it comes to money. I always tell girls to go to school, no matter what profession they choose, so that they are not dependent on anyone in life.

Years ago, women were considered only for taking care of the house, having children, and raising them. After marriage, women stopped working and did not have the opportunity to have a career. A woman could not support herself but was financially dependent on her husband. In fact, she also suffered from the fact that she had not paid social security contributions and thus was left without a pension.

Today, the situation for women has changed a lot. The woman has expanded her roles. Although she still has the responsibility of caring for the house and the children, she also works outside the home. She has become independent and helps her family financially. We also see that more women are successful in their careers and hold positions of responsibility. This is also because they find the help of their partner or husband and their parents. Free Child Care Centres as well as a 3-16 club are a support for working women.

There is still much to be done for the full emancipation of women and for the future I would like to continue to raise awareness of the need for gender equality. Everyone can succeed in different professions and responsibilities. The education children receive is the key to a better society, a society that does not discriminate against anyone.

From an early age, schooling should not only focus on academics, but also be a means to develop the personality for society. the contribution that women can make is always better and with dignity.

One fine day, on a sunny day, I decided to go for a drive with my mother, an elderly woman. After the drive, we stopped at a well-known establishment. A girl came up to us and asked us what we would like. We started a conversation with this girl in which she told us that she was training to be a pilot and that this was the part-time job that helped her to have some money so that the family was not so much burdened.

I looked at my mother and this girl and thought about what women had to go through. We were three generations representing different times. My mother lived in a time when a woman was seen as inferior to her husband. Her place was seen only in raising children and taking care of the house. She was considered the queen of the house, the queen in name only, because in reality she had no say even when it came to her rights.

Although every woman worked at home and in some cases helped in the family business, she was not allowed to work. The patriarchal system, in which the husband was the head, made it difficult for women to be valued on the same level as their husbands. Many women had great hardships because they relied on their husbands for financial support.

In the 1970s, education began to expand and open, opening up new possibilities and opportunities for women. Women began to study longer but were still limited in their career choices. Gone are the days when a woman had to give up her job when she got married, and so women could continue their careers even if they had children.

As time went on, women became more and more interested in what was going on around them. However, although certain laws began to change and women’s autonomy and inclusion in society increased, women continued to be discriminated against. Women’s wages remained lower than men’s, women who gave up their jobs to raise their children ran the risk of living in poverty when they retired because they did not receive enough social benefits. The famous ‘glass ceiling’ that says that even though a woman is capable, she still has difficulty getting into positions that are considered male domain.

Nowadays, the situation of women has greatly improved, although much remains to be done. Girls are no longer hindered in their career choices. We are delighted to see that more girls than young men are graduating from university and colleges and even exploring new horizons abroad. Women are being given the opportunity to participate in politics, where they can make a valuable contribution, especially when it comes to social and family issues. The burden of family is increasingly shared between parents and the government is also doing its part by introducing various aids such as free childcare facilities to help women pursue their careers.

More needs to be done to reach the pinnacle of gender equality. And this is where Women’s Day is important, so that we never stop trying to improve the situation of every woman. Women’s Day reminds us of both the good things that have been done so far and other areas that still need to be improved, such as situations where women suffer from domestic violence and women who have financial difficulties in managing their lives to have enough to support their children.

Women’s Day is in no way meant to show that a woman wants to be better than a man, but a day for everyone to understand that what is right for every man, women had to fight for. We want to live in a world where women and men are valued and respected on an equal level, not less and not more, because the dignity of all is important. Society needs the same participation and commitment of men and women. Only in this way will the desired equality and justice in the relations of the two sexes be created in our modern society.

Fortunately, this year’s Women’s Day has a much greater significance than in the past, especially in the last two years due to the Covid 19 pandemic and the associated restrictions that not only limited but conditioned women’s participation in society.

We often read or hear in the news how and to what extent the pandemic has led to an increase in domestic violence in all its forms in many countries, including Malta, especially in vulnerable families. This shows that unfortunately there are still men who believe that a woman is inferior to them, despite the laws that exist for such situations.

In addition, there is the exploitation of women in various workplaces, especially in terms of pay and working conditions. Therefore, this Women’s Day, women who work outside the home need to better understand and comprehend the need to join a union in order to preserve their rights and protect their conditions.

Women must seize the opportunities available to them in the economic and social spheres if they want to end their discrimination and eliminate inequalities in society.

Maltese women have made great strides in recent years, they have dignity and enjoy rights and freedoms that they did not have before. It is now up to each woman to strengthen her role with full activism, both in the society to which she belongs and, on the bench, or at the desk in the world of work.

Women’s journey toward their own social and economic advancement has not been an easy process. Until a few years ago, the importance of women in daily life was not recognized as it should be, so that women were often used and neither appreciated nor particularly valued.

Society was still too patriarchal, so much so that women were often treated insensitively in certain economic and social areas, and I could hardly find a woman in a leadership or decision-making position.

Thanks to the changes and reforms that have taken place over the years, especially in recent years, the situation of women in society has gradually changed for the better. Today, women have many opportunities to build a career, even if some of them are married and mothers.

Women are able to do the work that men do, but unfortunately there are still situations where women are not valued and paid the same as men, even if they do the same work.

I believe that much still needs to be done to properly appreciate the social and economic contribution that women can make. It is necessary to give women more space in the world of work by giving them more flexibility so that they can combine their careers with housework and raising a family.

In addition, the world of work today is not what it was 15 or 20 years ago. Therefore, laws need to be updated to eliminate the remaining gender inequalities and not only that. to give women more dignity, but also to strengthen the importance of women’s role in society.