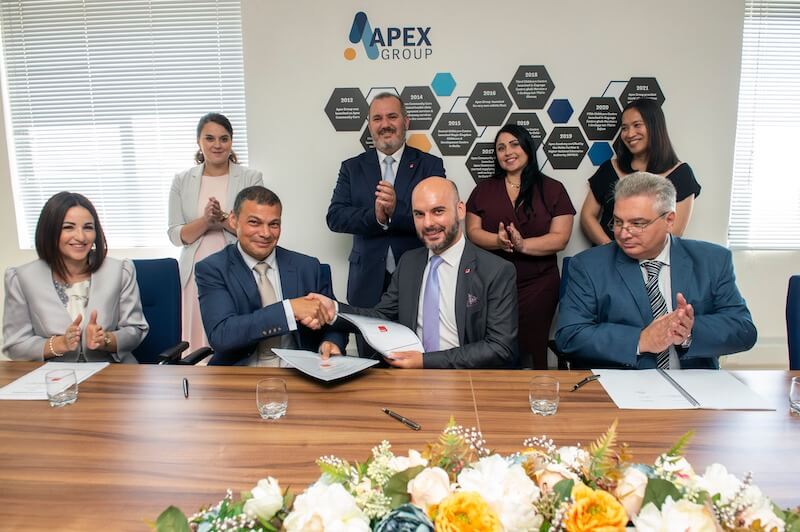 The General Workers’ Union has signed a new collective bargaining agreement with Apex Group, the first of its kind, which will last until 2025. As a result, caregivers employed by Apex Community Care will enjoy better working conditions.

The agreement was signed on behalf of GWU by Government and Public Entities Kendrick Bondin and Section Assistant Secretary Lawrence Bugeja. Signing on behalf of the Apex Group was Chairman and Director of Operations and Business Development Aaron Axiaq.

Also present at the signing of this collective agreement was the General Secretary of GWU, Josef Bugeja. The signing took place yesterday on the 10th anniversary of the Apex Group and after an event in which the company’s new offices in Mrieħel were inaugurated.

In his remarks, Secretary Kendrick Bondin described the agreement as “one in which both sides learned from each other.” He said the agreement was the result of how much this company invests in its workers and also in its customers. He thanked everyone involved in bringing the agreement to fruition and said he looked forward to further strengthening the groundwork already laid with the company.

For his part, Aaron Axiaq explained that the Apex Group is one of the leading service providers in Malta, offering a wide range of services to the community, including health and nursing care, childcare, building cleaning and educational programs.

“We wanted to create a one-stop-shop for professional and complementary services in the community, with the main goal of ensuring the overall well-being of our society,” Axiaq said.

The company began in 2012 with three employees and now employs more than 250 people. It plans to increase its workforce by 25% in the coming year.

The inauguration of the new premises was also attended by the Minister of Economy, European Funds and Lands Silvio Schembri, who said that the history of the Apex Group shows everything that makes a company. A Maltese company with a strong entrepreneurial spirit that does not give up in the face of challenges.

Minister Schembri said, “The fact that you were able to move with the times and also build up the childcare sector one year after its establishment gave you the desired result. You started with a first childcare and today you have six. This measure introduced by this government has helped many more women enter the workforce. “