“The GWU never fails to champion Malta and the advancement of our society at work, nationally and even globally.” – Josef Bugeja 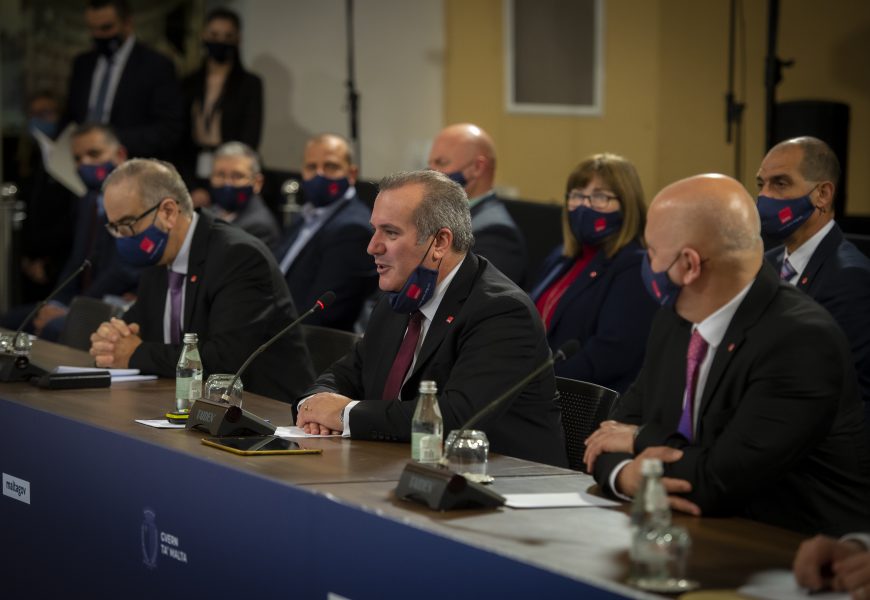 12:30pm: GWU general secretary Josef Bugeja said the GWU looks beyond the pandemic and its philosophy is based on social justice.

Bugeja said the GWU believes the pillars we should focus on are education, decent jobs in a new world of work, society, the environment, quality of life, the economy and those who are considered vulnerable.

He said the GWU believes that education is the best way to eradicate poverty. He also said that there should be more synergy between educational institutions and the industrial sectors per se, while educators themselves must go to workplaces to teach.

He said the GWU believes that education is the best way to eradicate poverty. He also said that there should be more synergy between educational institutions and the industrial sectors per se, while educators themselves must go to workplaces to teach.

He also said that there should be more transparency in wages so that abuses and forced union membership are stopped. He also stressed the need to reduce accidents and deaths in the workplace.

He also reiterated that the rent reform announced by the government last Saturday has given security to many elderly and vulnerable people living in these homes.

The GWU general secretary also spoke about green jobs, urban development and renewable energy, which we want to continue working on. “We believe there should be alternative mass transport and more incentives for electric vehicles.”

He said that the fight against poverty must be led by every citizen in our country. He said that we need to work together to address the inequalities that exist in the workplace.

“Together we can continue to fight loneliness. We need to address pre-1961 pensions. There needs to be more emphasis on financial literacy. “

He concluded, “As the GWU we are proud to be part of Team Malta. “We don’t mind at all that in the workplace, nationally and even globally, we always speak for Malta and how our society should evolve.”

12:00: The President of the GWU acknowledged the progress made in recent years.

On his part, GWU President Victor Carachi said that today is a historic day for the GWU as the cabinet is meeting in the natural movement of workers.

He said that the country has made great strides in the last eight years where poverty has fallen drastically, wages and pensions have increased, minimum wages have been raised and now rent reform has been announced. before 1995.

He also said that there is still much to be done to eliminate the precariat once and for all, but we are on the right track to move the country and the people forward.

Speaking about the pandemic, the GWU president said that it is not easy to reconcile health and economy but reiterated that our country is doing much better than countries bigger than us so everything has to be taken into consideration. to see the whole picture.

He reiterated that it seems that not everyone is pulling together while others have chosen to remain silent. He said that as the GWU they are responsible enough to put people’s health first in the midst of a pandemic.

11:30 a.m. White Paper on decriminalising cannabis for personal use up to a certain amount discussed.

The Cabinet will today discuss the tabling of a white paper that would lead to legislative changes to decriminalise cannabis for personal use up to a certain amount.

This was announced by the Prime Minister Robert Abela in his introduction of a Cabinet meeting to be held at the Workers ‘Memorial Building, Valletta.

Also present were the GWU Central Administration consisting of General Secretary Josef Bugeja, Deputy General Secretary Kevin Camilleri and President Victor Carachi, as well as the secretaries of the various sections within the same union.

The Prime Minister began his speech by saying that he was pleased that the Cabinet was meeting in the GWU building, which represents the interests of thousands of workers.

He said the worker was a key element of Team Malta and in a similar meeting at the Chamber of Commerce, the government presented its economic vision.

“To achieve this vision, we need the worker’s participation at the forefront. I want the worker to work in a dignified and humane environment,” said the Prime Minister.

He reiterated that when you talk about working conditions, the first thing you have to guarantee is work. He said that what this government has done, with the initiatives taken, has secured jobs.

“In the last few months, we have paid hundreds of millions of euros in wage supplements and quarantine leave. a total of 366 million euros. At the same time, we have continued to improve conditions for workers. We are giving them better wages and better conditions. Last year we had 16 collective agreements in the public sector, some for the first time. Today we are here at a time when the government is consulting and researching to design a contemporary workplace policy for the next seven years,” the Prime Minister added.

He stated that the government is guided by clear principles and is always interested in hearing from all social partners.

He also said that we always need to talk about work-life balance and how we can work more efficiently.

He affirmed that we face the labour market with courage. With the same courage, the same will to change, and the same determination that we showed in tenancy reform before 1995.

“I know how important this reform is to the GWU, which represents thousands of workers and pensioners whose insecurity has left them in the lurch.

I am encouraged by the positive feedback in general. There seems to be an appreciation for the path we wanted to lead to justice and reassurance. “